Fellow Wisconsinites, Greetings Again to You All!

We have already introduced Terry Larson, 2018 Candidate for WI State Attorney General, and Andrew Zuelke, 2018 Candidate for WI State Treasurer. Today, we wish to highlight our candidate for Wisconsin State Assembly, District 64 – Mr. Thomas Harland. As with all of our email communications with you, we not only invite, but also strongly urge you to share these messages with all of your friends, family, acquaintances, or others who share our political convictions, or who otherwise share a genuine and open willingness to hear and consider the political views of others. Encourage them to join our email list! This post was delivered to our email subscribers on Wednesday, September 12. Click here to be added to our email subscription list, and to receive our Communiqués when they are hot off the press! 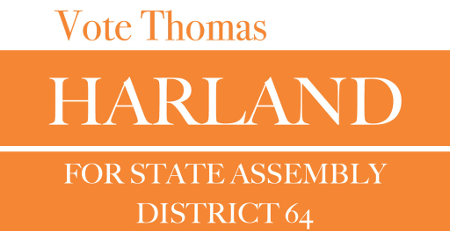 Thomas Harland is running for Wisconsin State Assembly in the 64th District. He is facing career politician, Democrat Peter Barca, who has not had a challenger on the ballot since 2010. The sole conservative on the ballot in District 64 , Mr. Harland will provide a conservative option that has been long-awaited by the people of District 64. He champions limited government and free market principles, supports ending the State Lottery, encourages the sale of state owned assets to pay down debt, and promotes traditional family values. Mr. Harland is a native Wisconsinite and graduate of Carroll University with a degree in Business and Economics.

Candidate Thomas Harland
On the Issues

For far too long, the 64th Assembly district has had no choice on the ballot but to send a Democrat to Madison. It is my belief that state and federal governments should be made up of true representatives of the people rather than career politicians.

Both Democrats and Republicans seek to increase control of the government rather than the power of their constituents. We the people recently voted NO to a power grab to eliminate a constitutional system of checks and balances. This suggests that voters want to influence decisions made for their families rather than relinquish decision-making power to those in Madison. I am running to represent the people of the 64th Assembly who desire to protect their unborn, 2nd amendment rights, and their freedoms through delivering a smaller government via part-time legislature. Wisconsin deserves to be represented by neighbors who love liberty and possess the will to defend against big government.

Where is WI State Assembly District 64?

Unless otherwise noted, the contents of this message are licensed by its author and the Constitution Party of Wisconsin under a Creative Commons Attribution-NonCommercial-NoDerivatives 4.0 International License.

The “Featured Image” at the head of this blog post, the “District 64” image toward the end of this post, and all CPoW Images: Copyright ©2018, Constitution Party of Wisconsin, All rights reserved.

All other Images in this Post: Copyright ©2018, Thomas Harland, All rights reserved. Used with permission.