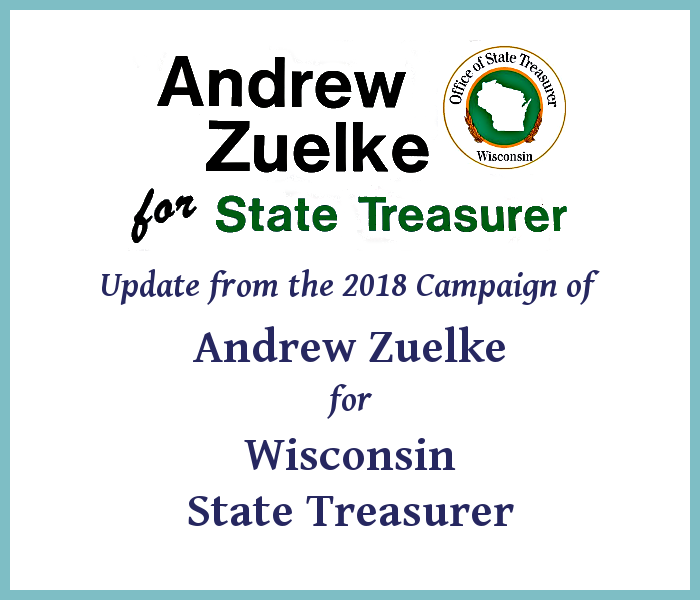 We have already introduced Terry Larson, 2018 Candidate for WI State Attorney General. Today, we wish to highlight our candidate for Wisconsin State Treasurer, Mr. Andrew Zuelke. As with all of our email communications with you, we not only invite, but also strongly urge you to share these messages with all of your friends, family, acquaintances, or others who share our political convictions, or who otherwise share a genuine and open willingness to hear and consider the political views of others. Encourage them to join our email list! This post was delivered to our email subscribers on Tuesday, September 11. Click here to be added to our email subscription list, and to receive our Communiqués when they are hot off the press!

Chairman of the Constitution Party of Wisconsin, Andrew Zuelke ran for Wisconsin State Treasurer in 2014, on a platform of preserving this constitutional Office, of insuring direct voter access to the functions of the State Treasury (rather than hiding them within the State bureaucracy), and thus maintaining responsibility for those functions via elected officers – not unelected, unaccountable bureaucrats. For years, Republicans had worked to empty this constitutional Office of its functions and to disperse those functions throughout the state bureaucracy, in preparation for a call to eliminate it from the Constitution entirely. In early 2018, they did just this. Referring to the Office of the State Treasury as “redundant” and “unneeded” (after having worked for so long to make it that way), they vigorously campaigned to amend our State Constitution, to eliminate this Office from the Constitution, and along with it, direct voter access to the functions of the Treasury, and direct accountability of its stewards to the citizens of Wisconsin. A statewide referendum was held in Spring of 2018, but rather than voting to eliminate this Office, as establishment politicians desired and expected, Wisconsin voters overwhelmingly agreed with Mr. Zuelke, choosing instead to preserve this Office by a considerable margin. Andrew Zuelke is running for State Treasurer again this year, vowing to make this Office a fiscal watchdog and to restore its original duties. His campaign platform was published in late August, and in it details his vision for this Office under his leadership.

My Campaign Platform
The Way Forward for the
State Treasurer

Last April, the voters wisely rejected the referendum to eliminate the office of State Treasurer. Much like I said in my 2014 campaign for Wisconsin State Treasurer, the voters felt that eliminating a constitutional office and consolidating powers in the hands of unelected bureaucrats is unhealthy for a republic, such as our form of government.

Here is my campaign platform –

I will work to restore to the Office of State Treasurer:

Duties I wish to add to this office –

On a parting note, voting for me this November instead of the Democrat or Republican candidates for State Treasurer will not affect the balance of power in the legislature and won’t affect the governor’s race. So please do not be concerned that a vote for a “third party” candidate will derail the ambitions of either big-box party. Instead, enjoy the opportunity to consider the options in this race, in a calm deliberative manner, without the churning angst associated with the dire political consequences of victory or failure that may potentially be associated with other races.

If you would rather have a true, constitutionally-oriented alternative, instead of having the same two interchangeable parties, with the same party loyalties and the same party enmities, in every elected office in Madison, now is your chance. Thank you for reading, and for considering Andrew Zuelke for the Office of State Treasurer.

Unless otherwise noted, the contents of this message are licensed by its author and the Constitution Party of Wisconsin under a
Creative Commons Attribution-NonCommercial-NoDerivatives 4.0 International License.

The “Featured Image” at the head of this blog post,
and all CPoW Images
Copyright ©2018, Constitution Party of Wisconsin, All rights reserved.

All other Images in this Post
Copyright ©2018, Andrew Zuelke, All rights reserved. Used with permission.