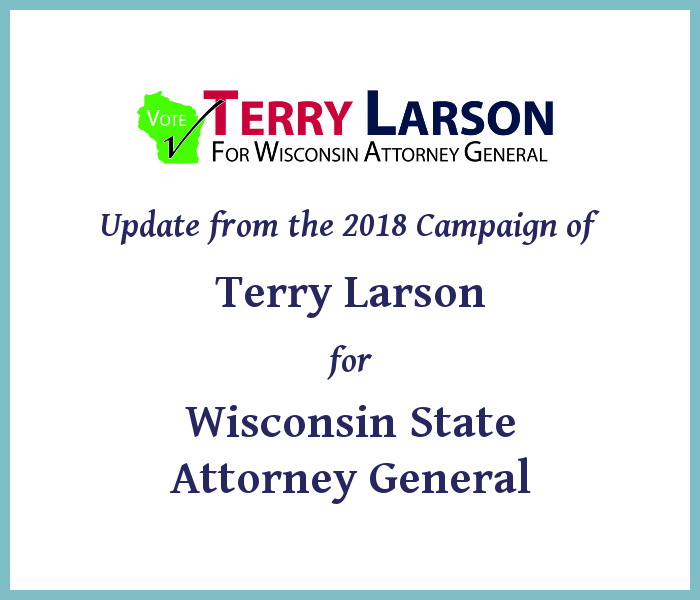 Over the next few days, we intend to highlight the Campaigns of each of these three candidates. Today, we wish to highlight our candidate for Wisconsin State Attorney General, Mr. Terry Larson. As with all of our email communications with you, we not only invite, but also strongly urge you to share these messages with all of your friends, family, acquaintances, or others who share our political convictions, or who otherwise share a genuine and open willingness to hear and consider the political views of others. Encourage them to join our email list! This post was delivered to our email subscribers on Monday, September 10. Click here to be added to our email subscription list, and to receive our Communiqués when they are hot off the press!

Mr. Larson has been a technical writer and publications project manager for agricultural, construction and consumer equipment manufacturers for over 25 years. As State Attorney General, Mr. Larson will oppose the enforcement of Supreme Court opinions as “the law of the land,” holding, rather, with the Constitution that State Law is written by State Legislators, not the Courts, that our State Constitution is written and approved by the people of the State of Wisconsin, not the U.S. Supreme Court. It is the obligation of State Legislatures to either affirm U.S. Supreme Court opinions by rewriting their laws accordingly, or to nullify those decisions. Mr. Larson has written a pledge to voters, which constitutes his campaign platform.

In signing this document, I am making a pledge to the citizens of Wisconsin that I will, to the best of my ability, act as the Wisconsin Attorney General effective January 7, 2019, to do the following:

1. I will not allow Supreme Court opinions to be enforced as law upon the citizens of the state of Wisconsin, and I will assist any other state attorneys general in doing the same in their states.

2. I will not involve the office of the Wisconsin Attorney General in matters like fighting opioid abuse beyond enforcing state laws and advising the citizens of Wisconsin and the state legislature about related laws. While fighting opioid abuse is a worthwhile cause, involving my office in every cause makes it impossible to perform my most basic job function, which is enforcing the laws of the state of Wisconsin.

3. I will insist the citizens of Wisconsin and the state legislature act to protect all veterans’ memorials and monuments in Wisconsin under state law, and I will assist any other state attorneys general in doing the same in their states.

4. I will take action to see federal immigration laws and/or similar state laws enforced, and I will assist any other state attorneys general in doing the same in their states.

5. I will take action against anyone infringing upon the freedom of speech or religion, or the right to bear arms which the citizens of Wisconsin have under both our federal and state constitutions, and I will assist any other state attorneys general in doing the same in their states.

Unless otherwise noted, the contents of this message are licensed by its author and the Constitution Party of Wisconsin under a
Creative Commons Attribution-NonCommercial-NoDerivatives 4.0 International License.

The “Featured Image” at the head of this blog post,
and all CPoW Images
Copyright ©2018, Constitution Party of Wisconsin, All rights reserved.

All other Images in this Post
Copyright ©2018, Terry Larson, All rights reserved. Used with permission.